Building signs need to be ADA compliant and we can help you with all your needs. The Grafics Unlimited team will talk to you about your goals and help you determine the right size, material and placement for your company. Please see below for some of the ADA Signage that we have done.

The term “ADA Signs” has come into common use in the architectural, construction and signage industries with the advent of the Americans With Disabilities Act, or ADA. Unfortunately, it’s a misunderstood term. Most people think it’s synonymous with braille signs. Certainly, signs with braille and raised characters are the most visible manifestation of the law requiring access to the built environment, but the sign standards in the ADA Accessibility Guidelines, or ADAAG, require much more than just braille and raised characters on some signs.

In general, almost every sign that would be considered an “architectural” sign must comply with one or another of the ADA Guidelines. In other words, if a sign identifies a permanent room or space of a facility, including exits, directs or informs about functional spaces of the facility, or identifies, directs to, or informs about accessible features of the facility, it must comply. Signs for advertising and marketing purposes, temporary signs, company logos and names are examples of signs or sections of signs that do not have to comply.

Although, because of the rules requiring Braille on some signs, the signage section is looked upon as benefitting persons who are blind and visually impaired, some of the sign guidelines benefit persons with mobility impairments or hearing impairments. In addition, one can say generally that easy to read and well thought out signage systems are of definite benefit to people who are deaf, have problems speaking, have cognitive disabilities or psychiatric conditions that cause them to avoid speaking to strangers.

The general rules for signage covered by the law are these:

All signs must have non-glare backgrounds and characters. (Exception is for reflective parking and other traffic signs.) Glare and reflection are a major problem for persons with vision impairments, and particularly for the elderly.

All signs must have “easy to read” typefaces. The rules are different for signs that identify rooms and spaces, and signs that direct and inform. That’s because persons who are “functionally blind,” that is, have no usable vision, are able to locate doors, and therefore can locate signs adjacent to doors that identify them, but have no consistent way to find directional and information signs that could be located anywhere along corridors.

Directional and informational signs can use upper and lower case letters (recommended by many experts for visual readability) and “simple” serif typefaces of a non-decorative nature. No condensed or extended typefaces are allowed. Strokes are of medium weight, not too bold or too thin. The size of the letters is dictated by the distance of the sign from the expected position of the sign reader. Signs high upon walls or overhead must have 3 inch high characters (measured by the uppercase character).

Signs that identify rooms and spaces are to be located adjacent to the door they identify so they can be located by persons who are functionally blind. For the most part, one sign is used by both tactile and visual readers, so there are compromises to assist tactile readers. However, it is possible to use two separate signs with the same information. Tactile signs require uppercase characters in sans serif typefaces. (Helvetica is not required, other sans-serif typefaces can be used.) The characters can be from 5/8 inch to 2 inches high. The Braille must accompany the characters (below the characters) and must be Contracted Braille (formerly called Grade 2 Braille). The signs are installed 48 inches minimum from the baseline of the lowest raised character and 60 inches maximum from the baseline of the highest raised character. If pictograms are used to identify the space (example: restrooms with gender pictograms), they must be in a six inch high clear field and accompanied by a tactile character and Braille label below the field.

There are four symbols that stand for accessibility. One is the familiar International Symbol of Access, or “wheelchair symbol.” It’s used generally to show that persons with mobility impairments can access entrances, restrooms, or pathways. Three are specifically for persons with hearing impairments. The “ear” symbol is the International Symbol of Access for Hearing Loss, and is used to show the availability of an assistive listening system. The “keyboard” symbol stands for a TTY or text telephone. The “phone” symbol with sound waves stands for the availability of a volume controlled phone.

The actual standards for the signs (and most other standards used in ADA regulations and state building codes), are actually the product of the ANSI (American National Standards Institute) A117.1 Committee. This large committee is made up of a balanced group of representatives from industry, the government, disability organizations, designers, code officials, and experts. it meets in 5 year cycles to revise the last published standard. The standard is then used by the International Code Council for its model building code, and has formed the basis of the new version of the ADA Guidelines, now called the 2004 ADA/ABA.[2] 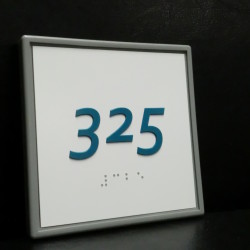 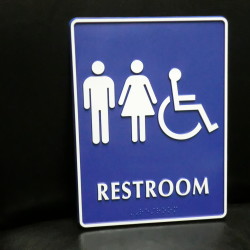